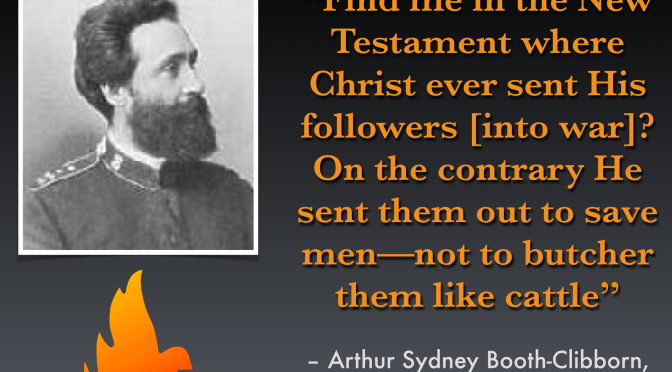 The son-in-law of William Booth, founder of the Salvation Army, Arthur Sydney Clibborn-Booth and his wife Kate joined the Pentecostal revival and spread the Gospel in the power of the Spirit their entire lives. Like most Pentecostals of their day they were committed pacifists, and Arthur wrote a book on why Christians shouldn’t kill called Blood Against Blood.

The worldling knows only one kind of brotherhood– that in Adam. The Christian knows two, that in Adam and that in Christ. In war the worldling denies one kind of tie in killing his fellow-creature; the Christian denies two kinds–he kills his fellow-creature and his fellow-Christian. Besides, the former has ever a “field” (a battlefield), open to him which the latter has not: He can sacrifice his life as a missionary, and, if needs be, as a martyr, and “sow himself” thus a seed of righteousness and life-producing life rather than as a seed of sin and death-producing death, which every sacrifice of life on the carnal battlefield inevitably is! – Blood Against Blood

In the book, he shows deep knowledge of the pacifist early church, quoting not only Scripture but also early church fathers to show that Christians originally refused to wage war:

Justin the Martyr, in the second century, says: “The devil is the author of all war.”
Tatian says the same.
Clemens of Alexandria spoke emphatically in the same sense.
Tertullian wrote: “Jesus Christ, by disarming Peter, disarmed every soldier afterwards, for custom never sanctions an illicit act.” And he further writes: “Can one who professes the peaceful doctrine of the Gospel be a soldier, when it is his duty not so much as to go to law?” And again: “Our religion teaches us that it is better to be killed than to kill.”
Cyprian declares war, like all other Pagan customs of his times, to be repugnant to the spirit and letter of the gospel. It is he who seems to have first asked of the whole world the unanswerable question: “Why is it that when a single murder is committed, it is deemed a crime, but that that crime shall be a virtue if multitudes are slaughtered?”
Lactantius, the next eminent writer in order of time after Cyprian, says: “It can never be lawful for a righteous man to go to war, whose warfare is in righteousness itself.” And again: “It can never be lawful to kill a man, whose person the Divine Being designed to be sacred as to violence.”
Origen, Ambrose, [Irenaeus], Chrysostom, Jerome and Cyril gave it also as their several opinions that it was unlawful for Christians to go to war. – Blood Against Blood 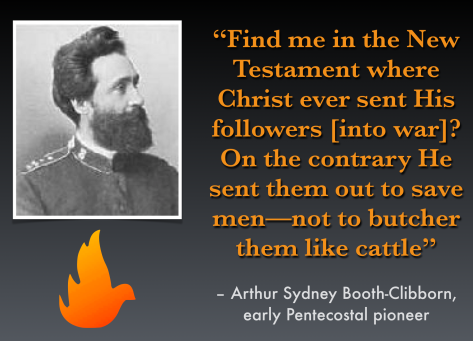 With roots in both salvationism and quakerism, Arthur ministered in many different denominational camps during his life. He and Kate joined the Apostolic Faith Mission when they moved to South Africa, led by John G. Lake, and made sure it continued to be a pacifist movement. Arthur repeatedly wrote article in the Pentecostal paper The Weekly Evangel on this topic:

“General Sherman: ‘War is hell. . . .’ George Fox, when offered a captaincy: ‘I cannot fight, for the spirit of war is slain within me.’ Sydney Smith: ‘God is forgotten in war: every principle of Christianity is trampled upon.’ Tertullian: ‘Our religion teaches us that it is better to be killed than to kill.’ John Wesley: ‘Shall Christians assist the Prince of Hell, who was a murderer from the beginning, by telling the world of the benefit or need of war?’” – Arthur Sydney Booth-Clibborn, “What is War?” The Weekly Evangel, 21 April 1917, 2.

“Find me in the New Testament where Christ ever sent His followers on such a mission? On the contrary He sent them out to save men—not to butcher them like cattle. . . . No! as far as the Christian is concerned, the “eye for an eye” system has given place to the “Turn to him the other cheek also” of Matt. 5:39-44.” – Samuel H. Booth-Clibborn, “The Christian and War. Is it too Late?,” The Weekly Evangel, 28 April 1917, 5.

Arthur Booth-Clibborn went home to the Lord in 1939, a few months before the tragic War World Two started. Let us not forget his important message of peace and nonviolence.

One thought on “The Pentecostal Pacifism of Arthur Booth-Clibborn” 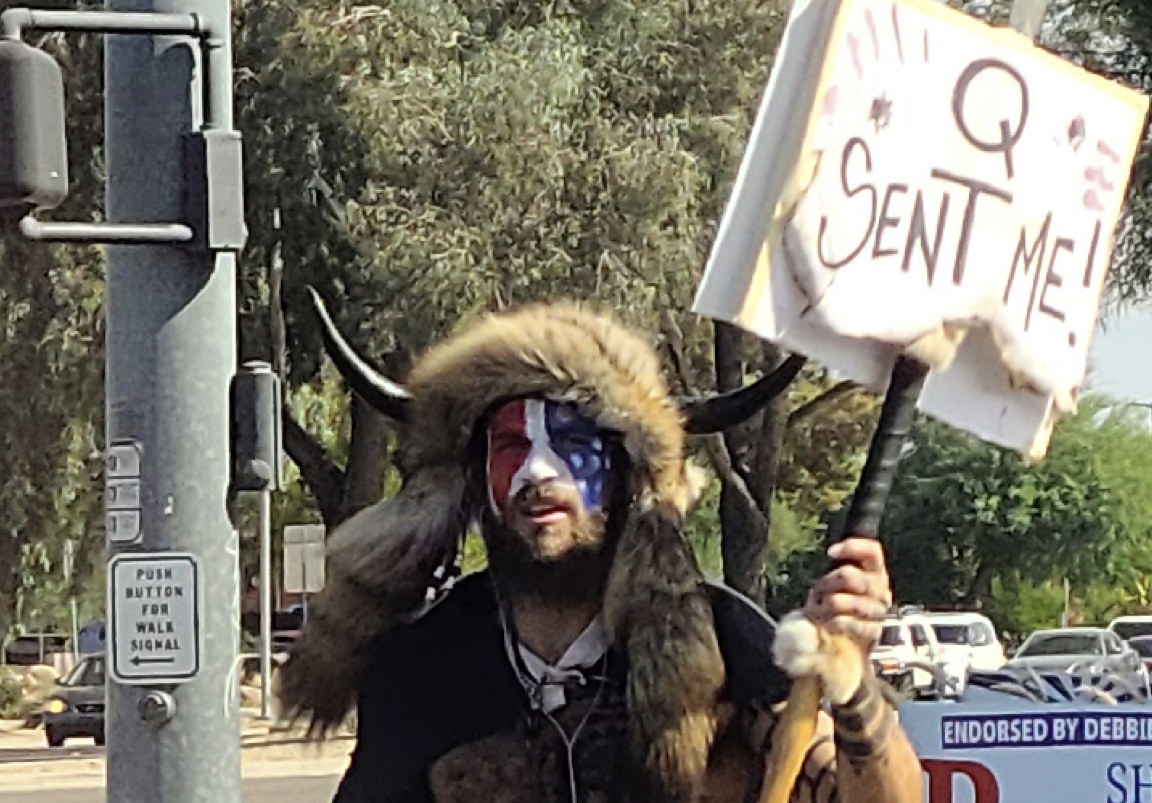 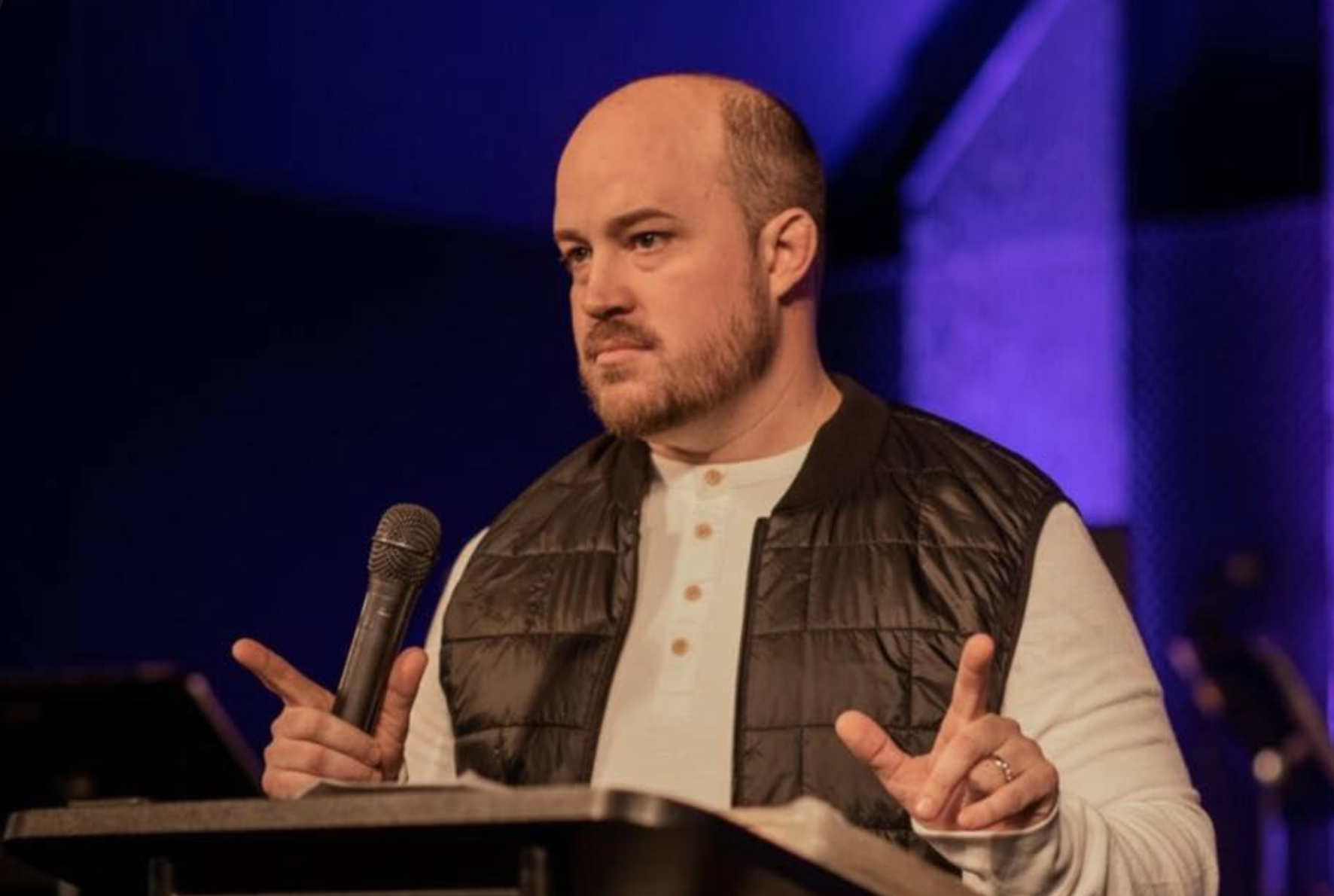 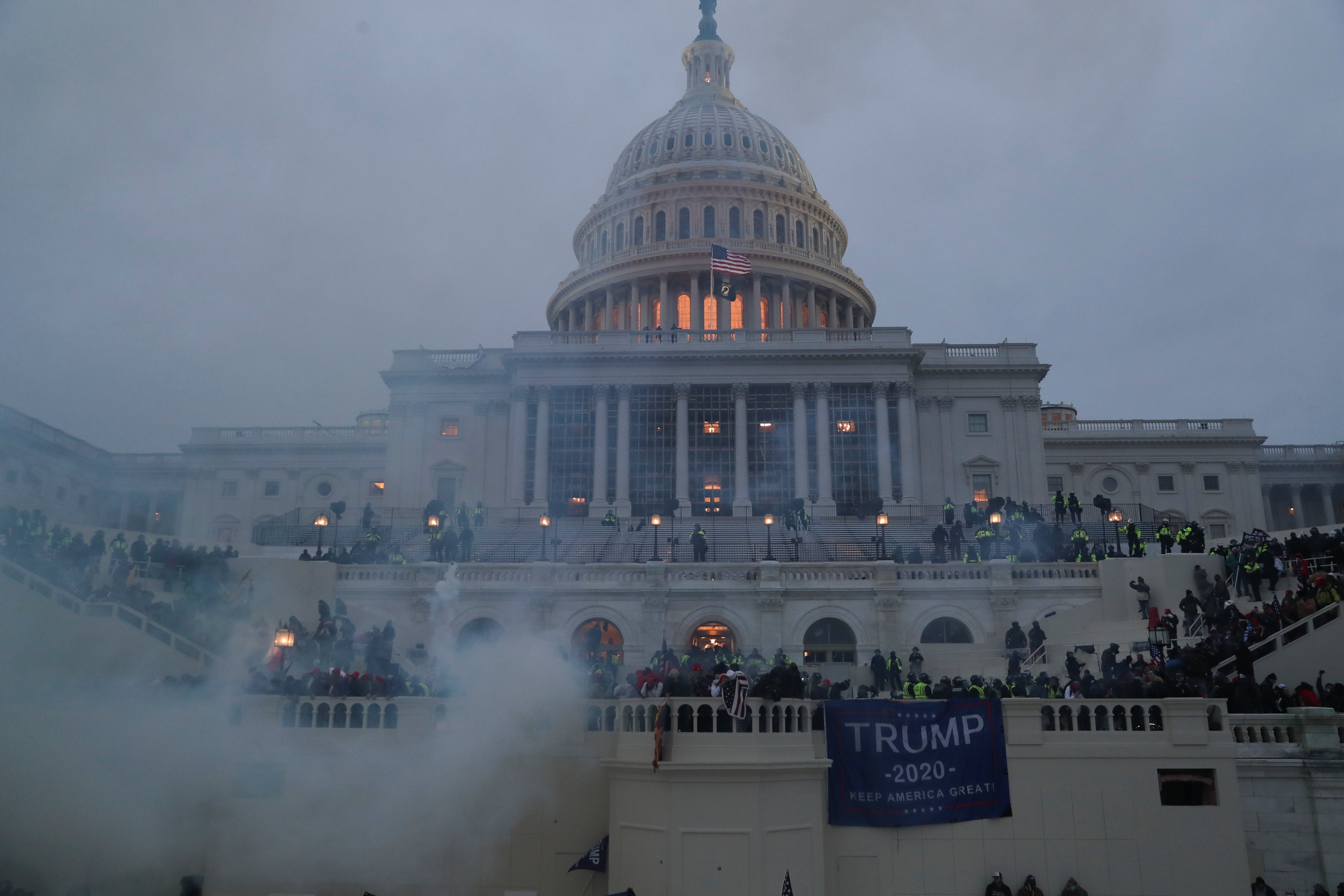