Why did Jesus command his disciples to buy swords in Luke 22:38?

Now, however,” He told them, “the one with a purse should take it, and likewise a bag; and the one without a sword should sell his cloak and buy one. For I tell you that this Scripture must be fulfilled in Me: ‘And He was numbered with the transgressors.’ For what is written about Me is reaching its fulfillment.”

So they said, “Look, Lord, here are two swords.”

A lot of people assume that it was in order to defend themselves, and use this as an argument for warfare and liberal gun laws. But if it’s one thing we can be sure of, it is that Jesus definitely didn’t intend the swords to be used for self-defense.

END_OF_DOCUMENT_TOKEN_TO_BE_REPLACED 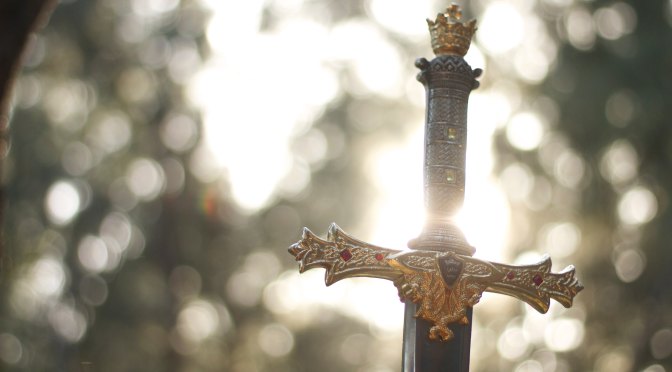 Some, both modern scholars along with church leaders since the fourth century, have used this passage as evidence to argue that Jesus is not altogether non-violent.

When we place Matthew 10:34 in its broader context, it becomes clear that Jesus’ teaching not only does not condone violence on the part of his disciples, it actually rules out all violence. As Jesus is preparing his disciples to proclaim the Good News of the arrival of the kingdom of God throughout the region, he warns them that he is sending them out “like sheep among wolves” (Mt 10:16, cf. vv. 5-15).

END_OF_DOCUMENT_TOKEN_TO_BE_REPLACED

American foreign policy is always in the news. After all, the United States currently has the largest military in the world, and frequently serves as the globe’s police force through alliances such as the United Nations and NATO. The recent appointment of John Bolton as National Security Adviser for the Trump administration simply reinforces this as Bolton was very supportive of the US invasion of Iraq and supports further military aggression towards Iran and North Korea.

On that last point, the Korean War also happens to be in the news again in response to recent nuclear testing by the North and now peace talks in Korea between both Korean nations.

War is in the news. It usually is, and I don’t see any chance of that changing any time soon. It is very unfortunate, but those of us in Christian peace and nonviolence organizations also have to talk about war. This is a great sin in our world, and it expresses the spirit of the Wicked One rather than the spirit of the Anointed One.  END_OF_DOCUMENT_TOKEN_TO_BE_REPLACED

Zondervan: Stop the publication of the white nationalist “God Bless the USA Bible”

Good news! Zondervan just decided to stop the publication of this Bible. Activism does work! A white Christian nationalist Bible compilation called the God Bless the USA Bible is set to be published in September. Religion Unplugged reports that Zondervan, an imprint of HarperCollins and prominent US Christian publisher, has authorized its publication. (The document […]