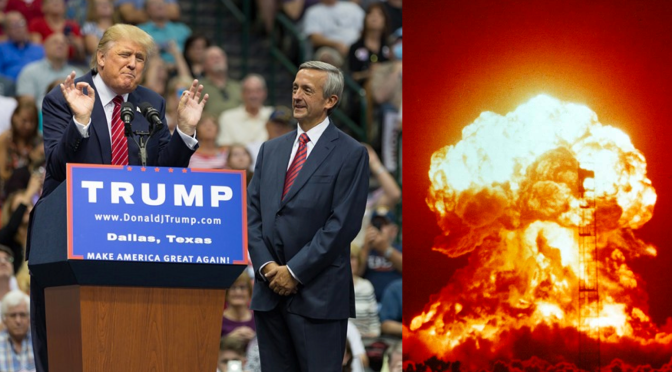 I was holding my breath the other week when Kim Jong-Un and Donald Trump – probably among the most unreliable political leaders of this age – were waging a war of words. Trump said that if Kim continues to threaten the United States they will be met with “fire and fury”, a statement he later said “wasn’t tough enough” (but what could be tougher?). The North Korean leadership almost immediately responded with threats of nuking the American colony of Guam, which likely would start the first nuclear war ever.

Thankfully, Kim later announced that he’s standing by, waiting for the next move by the “stupid yankees”. And I was able to breath again. But I’m taking short breaths, and pray that these madmen will come to their senses.

And then I stumble upon the comments by Southern Baptist Megachurch pastor Robert Jeffress, who as this crisis was at its peak boldly proclaimed that “God has given Trump authority to take out Kim Jong Un”. So how does Pastor Jeffress defend this claim?

“When it comes to how we should deal with evildoers, the Bible, in the book of Romans, is very clear: God has endowed rulers full power to use whatever means necessary — including war — to stop evil. In the case of North Korea, God has given Trump authority to take out Kim Jong Un.”

Now, it’s important to understand that Jeffress isn’t claiming any personal revelation here: he claims that based on the Bible alone, specifically Romans 13, one can reach the conclusion that God wants Trump to kill Kim. But Romans 13 emphasizes that all governments have the same authority: END_OF_DOCUMENT_TOKEN_TO_BE_REPLACED