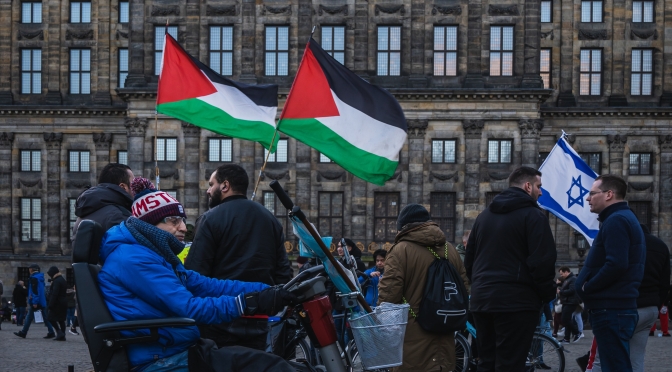 Once again, the Holy Land has been struck by war.

I feel compelled to write something that I wish nobody should have to write, something that should be obvious to everyone but which for some ill-conceived reason can be controversial to state in certain contexts:

Hamas firing on and killing the Israeli civilian population is awful.

The counterattacks by the Israeli Defense Forces (IDF) killing Palestinian civilians are awful.

War has no winners, there is no one to “cheer” on as if it were a sports event, there is no victory in war that does not come at the price of hating, tormenting and killing your fellow human beings.

Take a look at these pictures.

The upper image shows an apartment in Israel that was hit by one of Hamas’ rockets a few weeks ago. Five-year-old Ido Avigal, pictured to the right, lived in that apartment. He died immediately.

The picture below shows a girl being rescued by medical personnel after an Israeli attack in Gaza. The attack destroyed nine buildings and killed 43 people, including eight children.

In total, 68 children have been killed in the Holy Land these last couple of weeks. 66 of them were Palestinian.

All of this is awful. It’s sickening.

I honestly can’t understand those who are either trying to portray Hamas’ rocket attacks as a legitimate “freedom struggle” or the Israeli excessive violence as a legitimate “self-defense.” It’s madness on both sides.

They all kill children. I repeat: THEY KILL CHILDREN.

Of course, some will say: “Yes, but the children that my favorite team kills are really the other team’s fault because they use all the children who happen to die as human shields”.

Can’t you hear how crazy that sounds?

Sure, human shields are being used in this conflict both by Hamas and by the IDF, but many of these children have nothing to do with the warring parties. For example, five of the 66 Palestinian children who were killed by IDF attacks were sons and daughters of an employee of the Danish organization DanChurchAid.

They had nothing to do with Hamas or the war. They were just children living in Gaza and now they are dead because war is awful.

Thankfully, the violence has currently ended in a ceasefire, but it’s a fragile one. Please pray that peace negotiations are reactivated and that both sides lay down their weapons for good.

We don’t need people cheering on either side of the conflict as if the killing were some kind of a football game. We need peace. Even those who do not follow Jesus need to realize the wisdom and power of loving their enemies. And that love means that we cannot rejoice in anyone’s death.

God lets the sun shine on the righteous and the unrighteous, he wants us not only to love those who love us but to break the spiral of violence by reaching out to those who hate us. That’s the only way forward.

Micael Grenholm is a Swedish pastor, author, and editor for PCPJ.