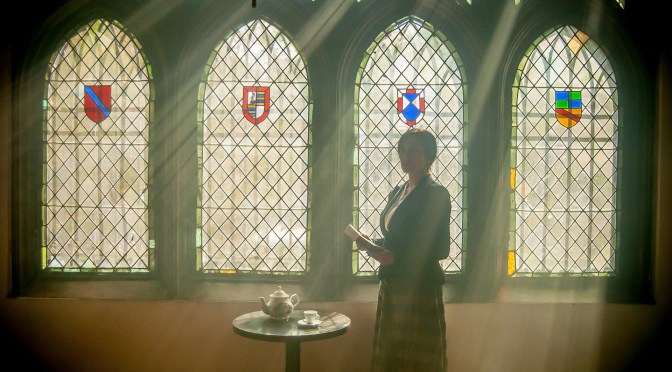 The Acts community gives us a wonderful picture of women being actively part of the community of the Lord in the last days. In Biblical times, the idea of female speakers was acceptable due to God’s use of prophetesses like Sarah, Deborah, Miriam, and Huldah. Luke, the evangelist who wrote the two-volume corpus, Luke-Acts, even began his Gospel with a series of prophecies uttered by the most unlikely women: the barren, the widowed, and the pregnant-before-marriage. Amid societal taboos, God displayed a unique reversal of norms, when he spoke through the barren Elizabeth, the widowed Anna, and the virgin, Mary. Clearly, the Bible demonstrates that God uses women as agents of his revelation.

Unfortunately today, some churches, who stand by a traditional male hierarchy view, do not permit women to speak as pastor-teachers or preachers. In my opinion, these groups miss out on the fullness of what God wants do in their assemblies. Deborah was a judge in the Old Testament, who prophesied, taught, counseled, and even led the community to victory (Judges 4). What can they say about Deborah’s role? What can they say about the role of Philipp’s prophesying daughters in Acts? Could it be that people who do not permit women to speak in the assembly do not recognize the eschatological reversal that God initiated when Jesus triumphed over sin and death?

For this blog, I would like for us to listen to Luke as he records the practice of the early Christian church. In Acts 2: 17-18, he wrote:

First off, in this passage Luke clarifies that Joel’s prophecy was being fulfilled in the last days, i.e. the days in between Jesus’ first coming and his return. He also clearly states that it was God who promised this eschatological outpouring of the Spirit, and this would be evidenced by the universalization of prophecy. Luke’s restatement of “on all flesh” is rightly translated by NASB as “on all mankind.” Obviously, God does not have gender preferences, nor does he have age preference and status preference. He considers all believers as worthy of the Spirit of Prophecy.

Most importantly, Luke emphasizes the extent of God’s outpouring. He writes in Acts 2:18 “even on my bond slaves, both men and women.” Notice that the word bond slaves here was the same word used by Mary when she responded to the Angel Gabriel in Luke 1:38, “I am the doulei (or female bond slave) of God.” Simply stated, Luke’s interpretation of Joel’s prophecy clarified that in the last days all his bond slaves, both men and women, were included in God’s prophetic activities.

The fulfillment of this prophecy can be seen in the early communities’ acceptance of women in prophetic roles. Luke mentions Philip’s prophesying daughters, twenty-five years after Peter’s Pentecost sermon. Luke records: “Now this man had four virgin daughters who were prophetesses” (Acts 21:9). His inclusion of this text tells us that he and the early Christian community acknowledged the prophetic function and role of women. In fact, Eusebius, an early church historian, indicated that these sisters were famous and enjoyed public recognition from the first century and onwards. They were said to have died in Asia Minor, where charismatic activity was ongoing and somewhat ecstatic in the early centuries. Hence for Luke, the prophetic activity of women in the early believers’ community was a significant feature of the last days.

Now let’s make the connection between prophecy in the Bible and prophecy today. In Biblical times, the word of a prophet was equivalent to the spoken word of God. In fact, it was used as an important criterion for the canonization of Scripture. A prophet today though does not have the same authority as Biblical prophets. He/she can only speak God’s message to the people in congruence with the already written and canonized Scripture. They cannot add nor stray from it, and their words must edify the body of Christ. Essentially, their words serve to remind people to remain faithful in their covenant-relationship with God.

Who are those that can speak the word of God in the assembly today? They are pastor-teachers, preachers, elders, Sunday school teachers, and the like. Are all of them only to be men? I think not. This prophetic enablement, as the record of Acts show, is available to all, even to women. The Holy Spirit has no status, gender, nor hierarchical preference. The Holy Spirit empowers those who submit themselves as bond slaves of God. In these last days, everyone is called to participate in God’s salvific and ministerial activities. There is an urgency and a radicalness to this task, so much so that after His ascension Jesus poured out the Spirit upon all humankind, singling no one out, because all hands are, figuratively, required on-deck.

Knowing the heart of God in the advancement of His Kingdom, and seeing how He has reversed the curse of sin, how then can the church silence women who are called and gifted to be pastor-teachers and preachers? The capacity to preach and teach essentially comes from the call and the anointing of God. As Paul wrote, “It is the one and only Spirit who distributes all these gifts. He alone decides which gift each person should have” (1 Corinthians 12:11, NLT).

So if the Spirit anoints a woman to speak in the assembly, if the Spirit calls her to teach and preach, why does the church silence her?

Lora Angeline Embudo-Timenia is a licensed preacher and bible school teacher of the Philippine General Council of the Assemblies of God. She is married to a pastor, Karlo Timenia, whose loving support enables her to fulfill her God-given call to preach, teach, and write. An academic version of this write-up can be read in her article on “Women vis-à-vis Prophecy in Luke-Acts” published by the Asian Journal of Pentecostal Studies (AJPS). You can also find more of Lora’s articles on her blog.