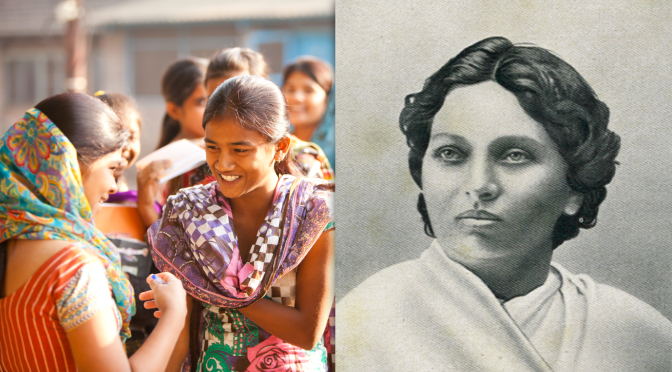 One of my favourite Pentecostal saints of all times is Pandita Ramabai (1858-1922), Indian activist, evangelist and holy roller. Over a hundred years before Malala she campaigned for women’s right to education, and she was extremely active in helping the poor and discriminated.

Born in a Brahmite family in what is now the state of Karnataka, she started to study at an early age and learned Sanskrit along with sacred Hinduist texts, astronomy, physiology and more. This was controversial since she lacked a penis, but her father encouraged her as she learned more and more about society, religion and activism.

In 1883 she went to England and taught Sanskrit at an Anglican monastery in Wantage. There she was saved. “I realized,” she later wrote, “after reading the fourth chapter of St. John’s Gospel, that Christ was truly the Divine Saviour he claimed to be, and no one but He could transform and uplift the downtrodden women of India.”

As she returned to her home country, she bought a piece of land outside Pune and started a Christian social community for young widows called Mukti, Sanskrit for Liberation. She also helped people who were orphaned, disabled or homeless, and when a famine hit India in 1896, Ramabai rescued over a thousand people and brought many of them to the Mukti mission.

In 1905, Mukti was transformed by a mighty outpouring of the Holy Spirit. Hundreds were saved at the community, and they prayed, worshipped and studied the Word of God like crazy. Miracles started to happen as the Holy Spirit bestowed His gifts to the girls at Mukti. This happened at the same time as the mighty Azusa Street revival was going on in Los Angeles, and by the Lord’s providence the groups got in touch with each other. In the January 1908 edition of Azusa Street’s paper the Apostolic Faith, the following report from Ramabai was provided:

“One Sunday, as I was coming out of the church, after the morning service, I saw some girls standing near the door of a worker’s room. They seemed greatly excited and wondering. I soon found out the cause. A girl was praying aloud, and praising God in the English language. She did not know the language.”

Many Pentecostal leaders, including T. B. Barratt and Carrie Judd Montgomery, went to Mukti and witnessed the amazing outpouring among the poor and marginalized. The Mukti community became the cornerstone of Indian Pentecostal mission, like L.A. was in the United States or Oslo in Europe, and thousands were blessed through what God was doing there. Ramabai continued to preach the Gospel, save the poor and campaign for women’s rights in the power of the Holy Spirit. She went home to Heaven in 1922.

Lord, help me become as passionate about You and the poor as Pandita Ramabai was, and let her example be an inspiration to many. Amen.

For a more detailed biography of Ramabai’s amazing life, check out Christianity Today’s article about her.