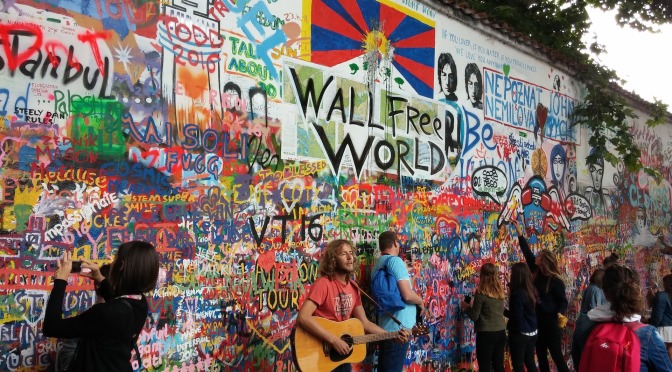 When I was a freshman in college, my friends and I were discovering charismatic spirituality together. We often had long prayer sessions, and we always expected to experience and hear God. It was messy, naive, often fueled by fear, but God was somehow in it as we experimented with this bizarre mysticism that was so confident in Christ’s Spirit being within us. Some of us walked through our campus often, quietly praying in tongues, rebuking the spirits among us causing fear, spiritual drought, depression, etc., and declaring a better way for the Church and for the school. We called this spiritual warfare.

I still believe in the power of spiritual warfare, even if much of our demon-hunting was a bit silly. I’d like to think that Holy Spirit interpreted our prayers the way they needed to be interpreted, and maybe we did push the devil out of our campus a bit. Hopefully. But still, before Friends of Jesus retreats, I often try to spend time in intercession, praying for the outpouring of the Spirit and protection from the enemy, who loves to stir up quarreling among believers and quench the Holy Ghost. I’m still a firm believer that Christ handed an authority to the Church to be declare, prophesy, and shake things on this earth, and in the spirit realm, to realize the reign of God among and within us.

So I still command demons to shut up and back off. I still pray in tongues when I sense something off, which sometimes is a valid spiritual concern, and other times just my social anxiety acting up. That being said, I very much believe these things are helpful, real, and good. I’ve seen God heal dozens of sick people when hands were laid upon them, and the word of God was declared over them: “be healed.” I’ve felt the power of deliverance, having the weight of shame torn off my spirit instantaneously through a prophetic word. I’ve felt shifts in the atmosphere during worship, and then I’d notice somebody quietly praying in tongues, or interceding, and I’d feel that they probably were helping cleanse the environment for God’s presence to be realized.

I think these things are real.

And as we go in the streets to protest, to demonstrate, we are engaging with the enemy: oppressive, abusive, and corrupt systems. We wage war against the spirit of racism as we declare that Black Lives Matter, and as we point out the sins of our country, the sins of our people, and reveal a better way. One of compassion, one of hope, one of generosity, one of love. Even if we are marching with those who do not identify as followers of Christ, they are carrying a mantle and anointing as well to crush the work of the enemy and extend the reality of God’s love.

The Church in America, in this mind-boggling and disheartening political climate, needs to speak. We need to call out the systemic sins of the world, including religious institutions, and live and preach a way forward. Your tongue has the power of life and death (Prov. 18:21), and when you choose not to speak out for Life, you are often giving power to death. So speak. Loudly. For the oppressed, for the forgotten, for the lost, for the hurting, and for all God’s children. And in doing this, you bind the enemy and you confess Christ.

In Quaker meeting, we see this prophecy fulfilled week after week, as we corporately experience the baptism of the Spirit and hear the voice of God from whomever God chooses to minister. We may not be a tongue-talking, holy-rolling bunch of folks, though I wouldn’t mind a little more of that, but one thing we Quakers know is the powerand voice of the Spirit. As the Society of Friends, we have a glorious heritage as a people of the Spirit and I’m thankful that even today we continue to reap the gifts of Pentecost in our profoundly charismatic worship.

Hye Sung Francis Gehring is an amateur pneumatologist, a pentecostal Quaker, and a friend of God & man.

One thought on “Political Protest is Spiritual Warfare”