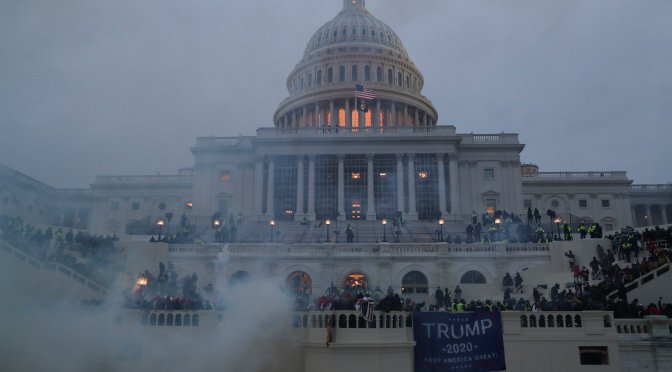 …captured in these images of the confederacy flag in the house and the fascist aryan fist raised in the chairperson’s, Vice President Mike Pence, seat of government (the equivalent of displaying the old Apartheid flag and raising the Hitler salute of Eugene Terblanche in our South African parliament)…

Trump himself called for this “stop the steal” “wild protest” on Capitol Hill, publicly in-spirit-ing his followers on The Hill (with words of fraudulent lies of massive election rigging) to do what they did: invade the house and stop the ratification process of the election result.

Unprecedented in US history… like an attempted coup. It happened in ‘the greatest’ democracy on earth, the ‘light on the hill’ for all other nations (America’s supposed destiny). Trump systematically undermined democratic institutions (as Jacob Zuma did), seeding deep public mistrust and division, sewing conspiracies of “the deep state”, etc.

Jesus said you know a good or bad person by their fruit, what routinely and predictably comes out their mouth (and their attitudes, their behavior). The fruit does not lie, it reveals the truth of what they are/have been rooted in, that which has formed their character. We’ve seen the fruit for four years. The fruit of Trumpism is now on full display for all to see. It is ripe for judgement.

Donald Trump didn’t change America, least of all made/make America great again. The truth is that Trump has revealed America… this is America… at least the divided half that supported him, deceived and captured by the spiritual powers working through his bad character and ideology.

Biblically speaking, we get the leaders we deserve…

God raises up and/or allows leaders in power, often to unmask the face of the nation, revealing the character of their supporters. In this case, the white US evangelical Christians, the fundamentalist part of the Church.

Trump has not so much damaged the witness and credibility of the Church – by the wholesale support of fundamentalist evangelicals, their court prophets and leaders continually blessing Trump – but God has used him to reveal their theological and moral bankruptcy in their idolatry of American Christian nationalism.

Judgement begins at the house of God. Their deafening silence right now, in light of these events yesterday, makes them all the more culpable.

All the prophets who prophesied Trump’s second term, and all the Christian/church leaders who continually blessed him without challenging and correcting him on his bad character, lies, manipulation, control, racism, sexism, ego-centric narcissism, dangerous nationalism, demonization of the dems and the MSM as “the enemy of the people”… they all must now publicly confess and repent to break the unreality of the parallel universe that Trumpism created, in which they have worshipped, lived, and continue to live, under whose protection and power they have operated.

VP Mike Pence, as a leading evangelical politician and the lap poodle of Trump, has particular accountability under God for his co-dependent enabling of Trump. Pray for him. If he has biblical Christian integrity left within him, after four years of erosion, he ought to humble himself and repent with godly sorrow.

At least he remained faithful to the constitution, saying he cannot overturn the election result as Trump demanded.

I will let the reader judge whether this is true biblical prophesying versus the multiple (evidently false) prophecies of Trump’s second term, and other such prophecies as in Covid’s quick disappearance, etc.

Alexander F. Venter is a South African Vineyard pastor, church planter and author. Ordained with the Assembly of God in 1975, he migrated to the Vineyard movement to work with John Wimber in southern California in 1982, and was part of the first Vineyard church plant in Johannesburg. He has planted & pastored churches in Zimbabwe, Cape Town, Johannesburg and Soweto. Alexander is married to Gill and they have two adult children, Zander and Misha-Joy. The Venter’s have lived in intentional Christian community for 23 years, and in 2013 relocated back to Johannesburg in response to a call for Alexander to pastor a Vineyard church called Following Jesus.

3 thoughts on “This is the Full Fruit of Trumpism”