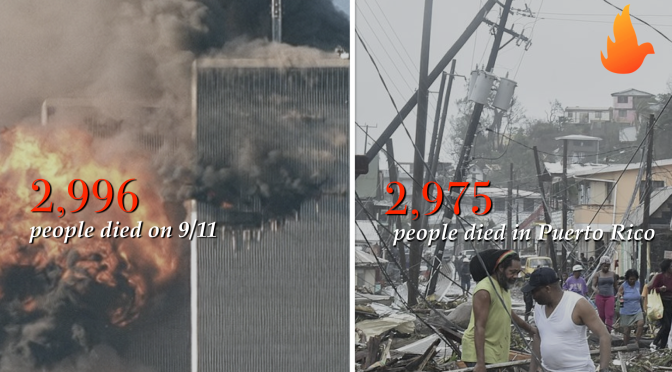 “How can you claim to have faith in our glorious Lord Jesus Christ if you favor some people over others?” – James 2:1.

We all know President Bush’s response to the attacks on World Trade Center. War on terrorism. The Patriot Act. Fear.

The attacks were framed as a national tragedy, Muslims were portrayed as the enemy, violence and surveillance were offered as the solutions. 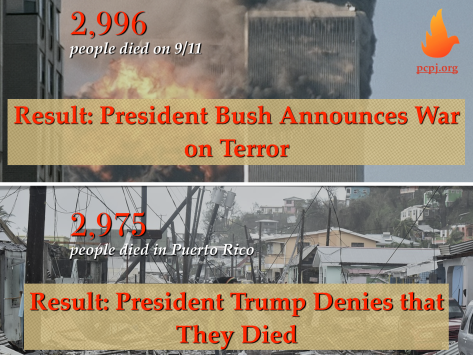 The contrast to President Trump’s response to hurricane Maria couldn’t be greater. Trump recently denied on Twitter that 3,000 people died because of the hurricane. He has described the federal relief as “fantastic” even though the infrastructure on the island still is malfunctioning one year later and many children haven’t been able to return to school.

“The administration killed the Puerto Ricans with neglect. The Trump administration led us to believe they were helping when they weren’t up to par, and they didn’t allow other countries to help us.”

Hurricane Maria’s effect on Puerto Rico should have been the 9/11 of our generation, sparking a new wave of activism against climate change, inequality and greed. Instead, it has been brushed away, as one of many tragic incidents striking the “developing world” as Westerners go on with their shopping and xenophobic rants on the Internet.

3,000 dead Americans apparently don’t matter much when they aren’t white or can be used to motivate warfare.

“If you really keep the royal law found in Scripture, ‘Love your neighbor as yourself,’ you are doing right. But if you show favoritism, you sin and are convicted by the law as lawbreakers.” – James 2:8-9

2 thoughts on “Bush vs Trump: How Presidents Respond to 3,000 Dead Americans”